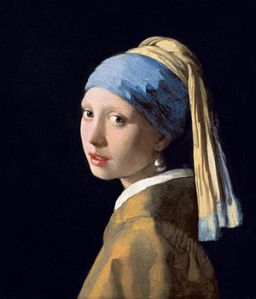 Girl with a Pearl Earring by Johannes Vermeer, a Dutch Master.

My first memory of Amsterdam was the four of us sitting outside a bar, drinking beer and eating chocolate cake that made us high. Good friends laughing easily and loudly at silly jokes. Two couples, both married in subsequent years.

Now, one couple is divorced and no longer in touch. The other is still going strong, examining grey hairs in the bathroom and holding in their tummies whenever it looks like they may actually have sex. That couple is bringing up their children together – wow, fancy that.

We went to Amsterdam as a foursome for the long weekend. We’d had a wonderful day looking at the paintings of the Dutch Masters and Van Gogh, except Graham, who’d sat on a bench in the middle of the Van Gogh gallery, yawning. It was his idea to eat the cake, then go look at the prostitutes in the thin, winding backstreets of Amsterdam where it all got more extreme.

We left the table, with its four empty beer glasses and a tip for the waiter, to be shocked or titillated or excited or something.

But, then we turned a corner, and we entered a thin, cobbled street where Anna and I were the only women who weren’t on sale. It was packed with men, and the women in the windows were more aggressive in their sales pitch. Not all of them. I remember one woman, about the age I am now, spreading her legs wide on a high stool, but her face was as bored as Graham’s had been when faced with paintings of wobbly haystacks and cypresses.

Anna and I both folded our arms across our chests and kept our eyes on the ground as we walked. In reality, we got to the end of the cobbled corridor and back onto a main street in minutes, but time seemed to pass much slower than that. We were pushed and jostled as we walked and someone put his hand on my arse and squeezed. He was gone before I could turn and find out who it was; he’d blended away into the crowd.

Hungry, we found a restaurant just across the street. It appeared to be basic, but was actually excellent. The food was top quality and so was the wine. Anna and I got giggly and the boys watched us down our wine far too fast. Our waiter, and I remember him well, was one of the most beautiful young men I’ve ever seen, before and since. He even smelled good, and his Dutch accent was slow and deliberate. Anna and I both got increasingly flirtatious with him, and our boyfriends watched grumpily. It was fun, playing with the beautiful boy as he served us. He was attentive with filling our wine glasses, and poured cream over our desserts in a way that made Anna and I downright gooey. We girls clung to each other laughing our heads off. Anna’s boy eventually started to see the funny side, and we had a laugh as we paid the bill. He suggested to the beautiful waiter that we hadn’t got enough money but the girls would pay in kind. It was funny, harmless and merely a joke.

As we headed back to the hotel, Graham’s rant began. The other couple dropped back as we walked to give us privacy.

How could I put him through that humiliation with the waiter? Didn’t I realise how hurtful it was? I’d made a fool of myself, and him. My behavior was disgusting. Degrading. Wrong.

Reader, I married him, but not for very long.

PS. This is the first of my A to Z Challenge posts. Everyday in April, I and loads more bloggers (linked here,) will be posting from A to Z, starting with A. My theme is ‘Memory’. There’ll be snippets of memoir in the coming month, usually shorter than this one, but also quick posts about the nature of memory. Tomorrow’s post will be about babies and memory ‘bubbles’.

PPS. Amsterdam is a wonderful city, and I’ve only written about a very small aspect of it here. There’s an incredible sense of culture and excellent taste there, and it’s very friendly and lots of fun. Do go. This post is not an accurate travel piece, but simply a representation of events as I remembered them at time of writing.