I began the habit of writing in cafes somewhere in my thirties. I wanted to do it in my twenties, but lacked the self-confidence to spend so much time alone in public. My scribbling in my teens and twenties was therefore done in my bedroom, secretly. 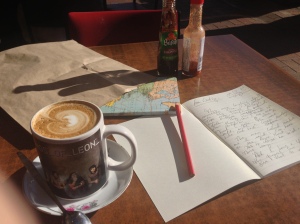 Nowadays, I write in public all the time, and as a mother, relish being alone whether it’s in public or not (peace and quiet – ahhh). I write in public because I find it less distracting than at home. At home the temptation is to put on the television, sort out socks (where do they go?), do a bit of hoovering, or even take a nanna nap (love those the most). Not to mention watch Come Dine with Me and The Jeremy Kyle Show. For me, getting out to write is a little like going out to work. I leave all those temptations behind and go somewhere to focus on a task for a while.

I’m also quite superstitious. I feel that if a good story was written in one cafe, I’m likely to write another good story in the same one, and I even try to sit at the same table if I can. There’s one cafe that’s particularly potent for me. It’s not the best, but the coffee is excellent and it’s a walk away from my home. It’s also right by the sea. I’m able to drop off the kids at school and walk along the beach to get there, and that’s good for writing too. I usually have an idea by the time I’m there, and I sit and write. All of my first drafts are written in long-hand first, so I’m not weighed down by a lap top. Then I can reorder my thoughts on the way home, and that’s where I type. The cafe is called The Marine Parade Deli and it has a light, open, cosy-chic feel to it. I prefer a darker more artsy cafe, but here’s where the best stories have been born.

Settling down to some editing at the RSC

Another great writing cafe is the Raumati Social Club. At least one writer can be found tapping away on their laptop in this cafe at any given time; in fact I was once part of a row of four! But I’ve only ever been able to do good editing here, so here’s where I come to edit. No big ideas have been born here, but good ideas have been successfully honed and shaped. That’s as important as the first draft of course – maybe even more so.

My favourite cafe at the moment is Baobab Cafe in Newtown, Wellington. I’ve never written here, but here’s where I have my fortnightly meetings with my writing supervisor, a successful short story writer who’s currently working on her first novel. It is an outstanding cafe. The coffee is wonderful, and the food is vegetarian, organic and has a homemade feel. The best part of this cafe is the area of Wellington that it inhabits. Newtown gets a bad rap generally as being a rough area of Wellington, and it is. But, it is wonderfully multi-cultural, has great, affordable restaurants all over it, and lots of second clothes shops and interesting little second-hand bookshops. It’s easy to spend way too long just getting lost in Newtown. It has a Saturday market and a rare fishmongers and I love the place. Throw in a few drunks and crazy people wondering around, and you’ve got a street that’s fascinating and exciting. It is ‘cool’, and there’s almost as many arty-farty types in Newtown as there are where I live on the Kapiti Coast, which is famous for it.

A friend who lives there tells me that he can hear the lions from the zoo roaring at night, and I think that’s as cool as being able to hear the sea.

Like all good cafes it has a couple of sofas by the window and its there that my supervisor and I sit for our meetings. Last time we had a meeting there, we were mid very-important-point when Bret McKenzie walked past the window and I totally lost all reasonable thought. Bret McKenzie is one half of Flight of the Concords, who are hilariously funny musicians/comedians. Bret McKenzie is otherwise known internationally as Figwit, after he played a ‘background’ elf in Lord of the Rings. The camera cut from Frodo making a rousing speech to a youthful and long-haired Bret Mckenzie and Figwit was born. ‘Figwit’ stands for ‘Frodo is Great – Who is That?’ because that’s what anyone who finds men attractive immediately thought. My supervisor saw me gawping at Figwit and said: ‘Oh that’s just Bret. He’s my next door neighbour.’ I was speechless. You get interesting neighbours in Newtown. 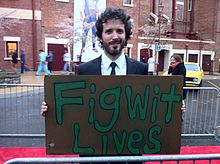 And interesting things happen in Newtown.

When I was there this weekend, this happened: I was taking my daughters to the zoo and we stopped for lunch at Baobab. As we were walking back to the car, I passed a young girl, who had a guitar in hand and was wearing punk-rock ripped fishnet tights. She was crying her eyes out in the street. Two men swooped, both with beer in hand. ‘I tell you Darling, men should not treat women like he has treated you,’ they said to her. ‘You come with us, Darling, and we’ll treat you real good.’ I thought: ‘fuck you, she’s not going anywhere with you’. Cut a quick conversation and much manipulation from yours truly short, and I soon bundled her into the passenger seat of my car and the men walked away thwarted. I worried that I should get involved with my children present but I weighed up the risks and decided that the small threat posed to us in broad daylight on a busy street was nothing to the threat facing this young girl. There was only one way that her afternoon could have ended if I hadn’t intervened; she was going to leave with the men whom she’d mistaken for ‘kind strangers’. ‘Kind’ my ass.

Once she was in my little car and her guitar was in the boot, I saw how out of it on drugs she was. She couldn’t focus, could barely talk and smelled really bad. She wanted to garble on about men and what bastards they are, and get some advice about her boyfriend, but I didn’t want to get into it. I just gave her the standard ‘get rid of him’ speech. I said: ‘We generally have to kiss a few frogs before we find our Prince Charming, but that doesn’t mean we have to keep the frogs around for any length of time. Bin him.’ She looked at me as if I’d said something completely amazing, as if I’d just told her the meaning of life or something. She got out at her friend’s house and I wished her luck. She needs it. There’s lots of questions here – should I have done more to help her? Where are her parents? And basically, what the hell? My six year old stated as we drove off: ‘What a nice teenager.’ But, I think of her with a sense of impending doom; I pray that I’m wrong about that.

But that’s Newtown – dark, vibrant, and intriguing. A strange place with an ordinary name. Nowhere else in New Zealand reminds me more of London, Birmingham, Leicester – those familiar cities in England I miss so much.

If I didn’t have my girls, I would be living in one of the cute properties tucked away in its side streets, however we three need space and a beach.

But never say never – we probably will need to move closer to town when I finish this MA, for work more than anything, and the thought of writing a novel in Baobab Cafe feels pretty rich to me. 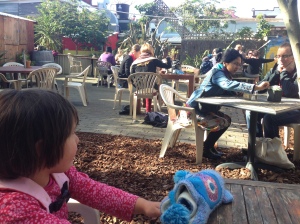 My youngest checking out the arty-farty types in Baobab Cafe.

2 thoughts on “Baobab Cafe and a Ripped Fishnet Rescue”